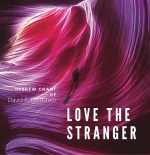 David P. Goldstein invites you to be a part of the Love the Stranger Project, a musical collaboration that is the culmination of over 17 years of David’s work in the spiritual community. The chants of this album and workshop series were formed to help people on their journey of personal growth, honoring and embracing the differences among us all, as part of a socially responsible, caring community.

Love the Stranger is the way that we use our musical and spiritual voices to work with others and cause positive change in the world!

Stay tuned to this space to learn more about the upcoming workshop series and more!

In August and September, 2020, generous supporters raised $3,500 for the Love the Stranger Project, of which $600 went to the Save the Music Foundation, a non-profit organization which partners with local communities and school districts to revitalize and build sustainable music programs. They achieve this goal by investing in schools, supporting teachers and advocating for music education. Their efforts have allowed them to help over 2,000 schools nationwide.

Intentions of Love the Stranger Chants

Sample Track from Love the Stranger

Thank you for your generous contributions to the Love the Stranger Project!